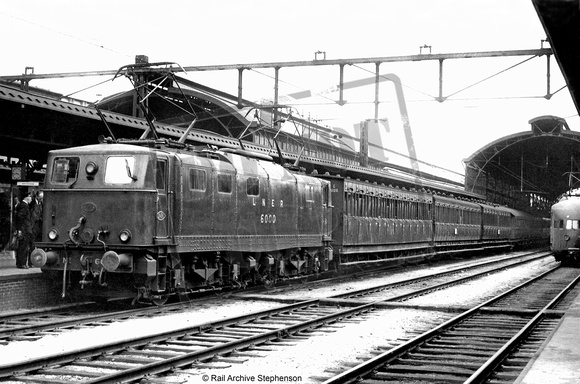 LNER class EM1 Bo-Bo No 6000 stands in Utrecht station with an Eindhoven to Amsterdam train whilst on loan to the Dutch Railways, August 8, 1949.

Peter Kerslake says "Those who know about these things will doubtless know the reasoning behind the prototype class EM1 spending from 1947 to 1952 in Holland , and this interesting and rare image has captured "Tommy" as it was known at Utrecht on the 8th. August, 1949 working on the Netherlands Railway system.
Constructed in 1941 by the L.N.E.R. this prototype of the eventual class of fifty seven was the only one built at Doncaster, the remaining fifty six being built at Manchester's Gorton Works, within siight of the Trans Pennine route upon which they were to spend their working lives.
The name "Tommy" derived from the name bestowed upon soldiers in the first war, the locomotive carrying a pair of splendid nameplates until British Rail for some sad and ill conceived reason decided to remove the plates in 1968 although the locomotive was always known as "Tommy" during its later years despite this travesty.
This image shows the squared front windows ,unique to "Tommy", together with the absence of cabside windows which were fitted to the later versions. "Tommy" was condemned in March of 1970 and disposed of at Crewe in 1972".
Photo: Rail Archive Stephenson
Photomatic/Rail Archive Stephenson
Powered by ZENFOLIO User Agreement
Cancel
Continue