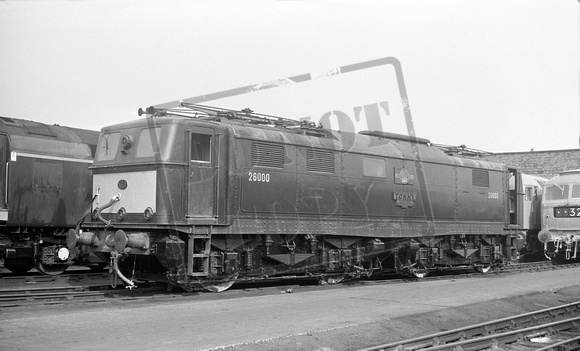 Peter kerslake says " The pioneer class EM1, built at Doncaster in August of 1940, the only one of the planned class of seventy to be completed before Doncaster turned its efforts to wartime production, 6701 as it was initially numbered was restricted in its initial main line trials commencing in September of 1940 with just five miles or so of suitable track being available on the British network, the locomotive being returned to Doncaster in October of 1940 following its limited spell of trials where it would appear to have ben stored out of use until the end of the war.
At the end of the war, and with Holland seeking to develop new motive power following its years under occupation , the opportunity was taken to send 6701, by then renumbered 6000 to Holland where that Country's electrified network would provide sufficient workings to fully evaluate the new locomotive.
6000 returned home from Holland on the 28th March 1952 when work on the trans Pennine route had begun afresh, the locomotive remaining in service until being withdrawn in March , 1970 although the nameplates had been removed by BR in 1968 for some obscure reason . It ended its days at Crewe in 1972, sad to say. "
Powered by ZENFOLIO User Agreement
Cancel
Continue