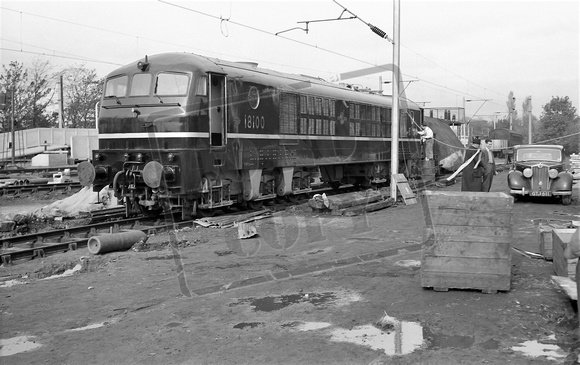 BR Metropolitan Vickers prototype 25kv Elecric Co-Co No. E18100. Built at Manchester in 1951 as a Gas Turbine powered locomotive No. 18100, converted to 25kv Electric operation at Metropolitan Vickers' Bowesfield Works at Stockton on Tees, completed on 31st August 1958 and re-numbered to E1000. Withdrawn in April 1968 as BR No. E2001. This is East Didsbury Sidings photographed in October 1958. E1000 is being re-numbered from 18100 to E1000 and at this point in the proceedings, carries both numbers! The sidings were used for a number of associated tasks with the trial 25kv electrification of the 12-mile Styal line route from Slade Lane Junction in Manchester to Wilmslow in Cheshire. This was a pioneering event that was to have a hugely successful outcome.
Peter Kerslake adds "Being readied for its new but short life as a crew training locomotive.
There seems to be some damage sustained to the roof area behind the cab door which looks rather the worse for wear compared to the other end. The car, I believe, is a Lea Francis."