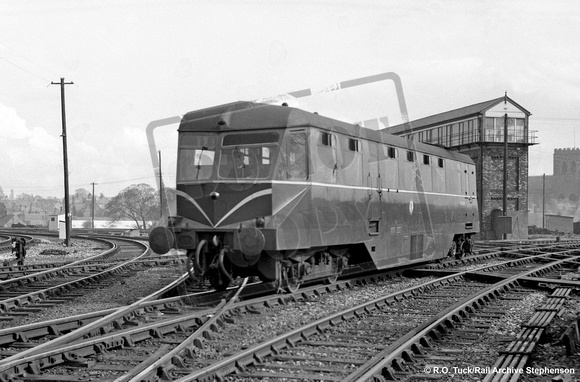 GWR diesel railcar No W22W enters Shrewsbury on a service from the Severn Valley line, April 13, 1961.

Peter Kerslake says "Situated at the southernmost end of Shrewsbury station that lofty signal box must have provided its "bobbies" with a splendid panoramic view of all that was going on, the lines to and from Wolverhampton and beyond curving away to the left whilst those between here and Welshpool and the Cambrian network are on the right.
Railcar number 22 is now in "all over" green livery and was one of the varients with Swindon built bodywork , conspicuous by its sharp "razor edge" ends which contrasted with the earlier rounded and streamlined versions from Park Royal and the Gloucester Railway Carriage and Wagon Company.
This example was one of fourteen built during the wartime years in 1940 and was capable of carrying sixty tons in weight with a passenger capacity of forty nine passengers and equipped with twin Diesel power units."