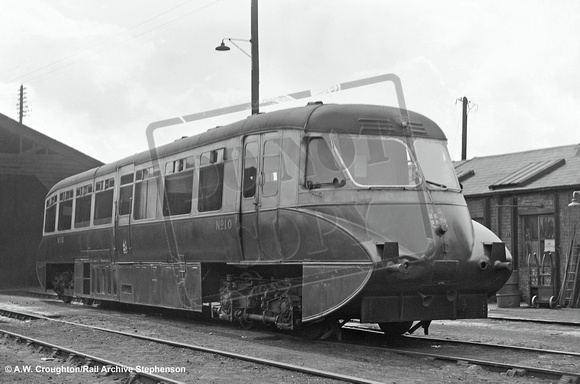 Peter Kerslake says "G.W.R. Railcar number 10 is portrayed here at an unknown location in 1948 but is recorded as being one of six allocated to Worcester in 1956 , having transferred there earlier from Bristol St . Philip's Marsh .
Worcester used its allocation of the Railcars on services to Birmingham Snow Hill , running via Bromyard, whilst those examples based at Bristol St. Philip's Marsh in their early days were used extensively on the commuter and local passenger rosters to and from Avonmouth and Severn Beach , routed via Clifton Down , Sea Mills and Redland, with those same workings later being again handled by the five Railcars at that Depot in the mid ' fifties .
Introduced in 1933 the class remained in service until the early 'sixties , with W4W being the longest survivor , the initial examples being followed by three enhanced examples built in 1934 for fast and comfortable runs between Cardiff and Birmingham , aimed at businesmen, and each fitted with a miniature buffet .
Two examples made it into preservation , namely W4W which was restored at Swindon following withdrawal in 1962 and W22W , a former Reading shedded example , now housed by the Great Western Society at Didcot. "