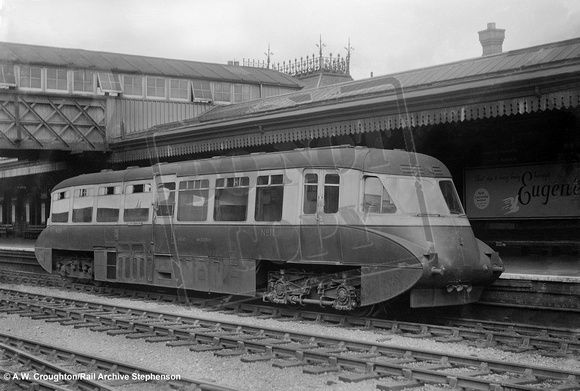 Peter Kerslake says "Railcar number 11 is seen here at Slough in 1949 working a local passenger service before being transferred down to Swansea's Landore Depot by the mid 'fifties.
This photograph shows clearly the design of the bogies together with the air operated horns beneath the cab front, the Railcars being capable of attaining a maximum speed of sixty miles an hour with comfortable seating for 69 passengers and powered by an A.E.C. built Diesel producing 121 Horse Power.
Later examples were favoured with an additional power unit which doubled the output whilst a final batch of four from 1940 and 1941 were rated at just 210 Horse Power each but were designed to operate in pairs with inbuilt buffet facilities and were sufficiently powerful to permit a 70 foot corridor coach to be incorporated between each pair of Railcars.
Those last four, namely W35W, W36W, W28W and W25W were at Bristol St. Philip's Marsh from the late 'fifties working between Temple Meads and Portishead as well as to Weston super Mare and South Wales via the Severn Tunnel but W35W and W36W were destroyed by fire whist working through St.Annes Park station in April of 1957. "