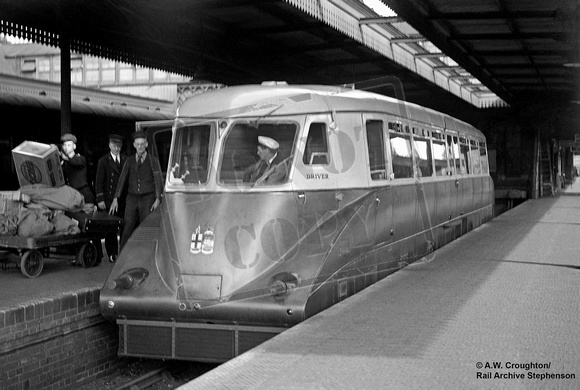 Peter Kerslake says "The first of her class which would eventually total thirty eight, Railcar number 1 shows the original design of sharp wedge shaped front end which in later versions gave way to a more attracive rounded design, the Railcar being 62 feet in length with a seating capacity of 69 passengers and capable of reaching sixty miles an hour thanks to its single 121 Horse Power Diesel power unit.
A.E.C. of Southall built the main frames, the power units and transmissions with Swindon producing the bodies on the early examples.
Early members were allocated to Bristol, Weymouth, Newbury and Reading and this one is most likely to be a Reading one. Note the driver with his white cap.
Number 1 later saw service from Oxford in company with numbers 3 and 12, all three being there in 1956."