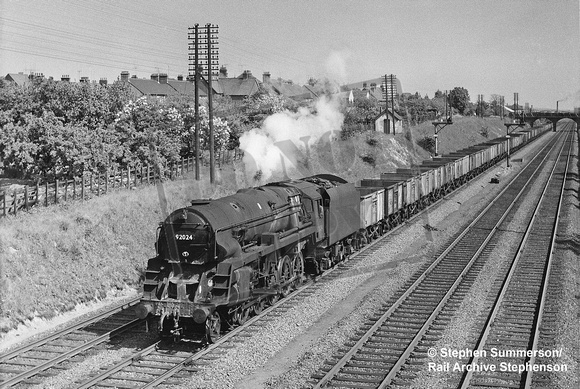 Former Crosti 9F 2-10-0 No 92024 heads down the Midland main line near Leagrave with a Brent to Toton train of coal empties in June 1962.
Peter Kerslake says "One of the ten Standard 2-10-0s equipped with the Italian design of Franco Crosti boilers, 92024 has a massive rake of coal empties stretching away in the distance here near Leagrave,. The Crosti engineswere all allocated to Wellingborough from their introduction in 1955.
Intended for use as here on coal workings between Toton and Brent, it had been envisaged that their design would permit their use of poor quality coal at a time when good quality coal was in short supply, but the exercise was to prove unsatisfactory as the engines did not produce thn promised economy in coal consumption. Higher maintenance requirements on shed also contributed to their conversion to conventional boilers, beginning with 92026 in September 1959, the conversion programme running for three years before all ten were converted."
Photo: Stephen Summerson/Rail Archive Stephenson
Stephen Summerson/Rail Archive Stephenson
Powered by ZENFOLIO User Agreement
Cancel
Continue