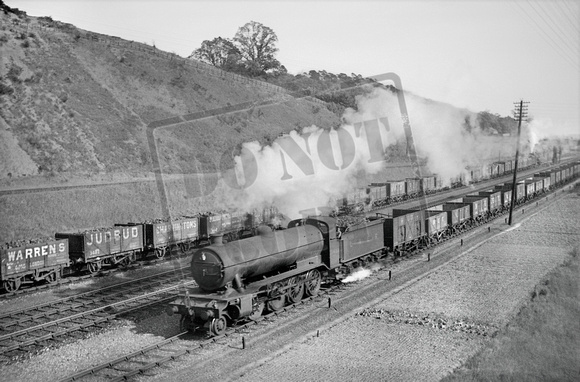 Sandy in Bedforshire is where, for a short distance, the former L&NWR Bedford to Cambridge 'Varsity' route (closed in 1968) and the GNR lines that are now part of the ECML run in parallel for about half a mile but do not connect. Both companies had separate but adjacent stations with a shared island platform, this is now merged into one station. An ex-GNR Gresley 'O2' 2-8-0 No. 3461 plods north with a train of empties. Behind, an unidentified loco has a similar train loaded with coal is heading south mainly consisting of colliery 'user' wagons. 3461 was built at Doncaster in May 1918 as GNR No. 461 and was withdrawn in May 1948 just after nationalisation, still as LNER No. 3921.