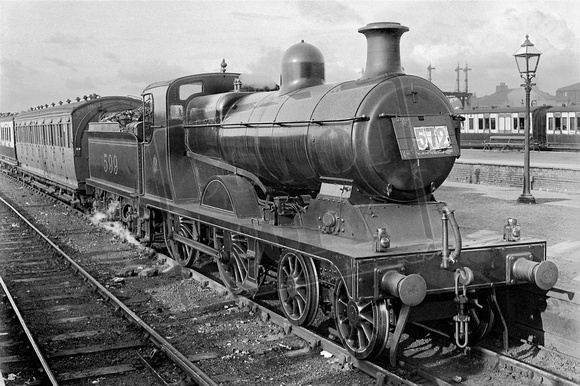 Ex-North Staffordshire Railway Adams 'KT' (LMS '2P') class 4-4-0 No. 599. Built at Stoke in October 1912 as NSR No. 38 and withdrawn in September 1928 as LMS No. 5414. Ex-North Staffordshire Railway locomotives occasionally ventured away from 'home' territory and here in fine LMS crimson livery is 599 (5414 from 1927) having arrived at Blackpool Central in 1924 with an excursion. I believe the leading coach is of NSR origin but some lovely old ex-L&NWR coaches are also in view.
This originally came as Llandudno but we had doubs about the location. The signals are definately not LNWR and we cannot see where there are signal gantries adjacent to housing, controlling access to platforms at this location.
Looks more like Blackpool Central with the loco near the buffers at the eastern side of the station.
The signal gantry, located at the end of Chapel street, controlled access to the main platforms at the west side of the station.