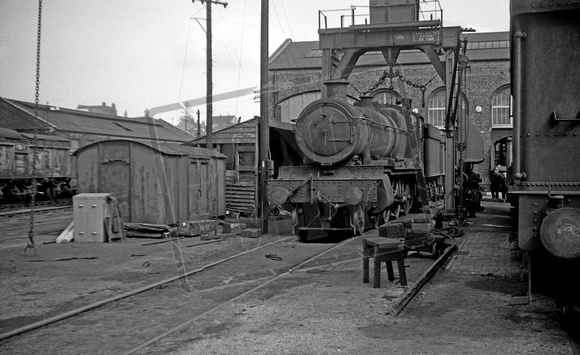 If it helps identify and date it 4664 was in the works on the same day. From other locos this is the early summer of 1965.

Peter Kerslake says "Yes , this is a late in life image of Worcester Works and quite probably 1965 , the final year for Western Region steam , with the sadly unidentified "Grange" in the dreadful state that the remaining Western Region locomotives had deteriorated into during the final months of that year , typically devoid of her name plates and smokebox door number plate although she still retains her cabside number plate, at least on the fireman's side !
The staff at Worcester Works were still "patching up" what came into their hands during those last months, with a fair representation of the few classes remaining in service regularly running through Gloucester, to and from South Wales, with both Newport and Severn Tunnel Junction Depots remaining open to steam until the final months 0f 1965 when it all came to an end"
Powered by ZENFOLIO User Agreement
Cancel
Continue