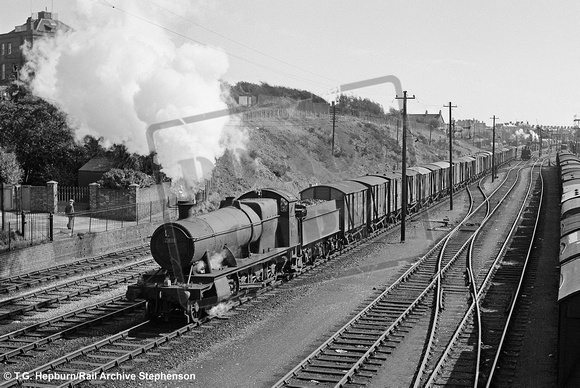 Peter kerslake says "My 1956 shedbook has 2811 allocated to Severn Tunnel Junction, but whether she was still there at the date of ths view in September of 1957 is not clear to me, but this fine portrait has her leaving Weymouth wih an impressive rake of ventilated fruit and perishables vans.
Fresh produce from Jersey and Guernsey would have been off loaded from the passenger ferries running between here and the Channel Islands and brought to the freight yards and from the dockside through the narrow and congested streets of Weymouth by one of the three little "1300" class of Pannier Tanks allocated at Weymouth at this time for such duties before being handed over to the locomotive rostered for the onward journey .
An early member of her class, 2811 had been built at Swindon in 1905 with the class proving one of Mr. Churchward's most successful designs , the first to be withdrawn in 1958 being 2800 itself, whillst 3836, of the later "3800" development, was the last remaining in service until 1965, with seven of the initial "2800" series and eight of the later "3800" version making it into the preservation age."