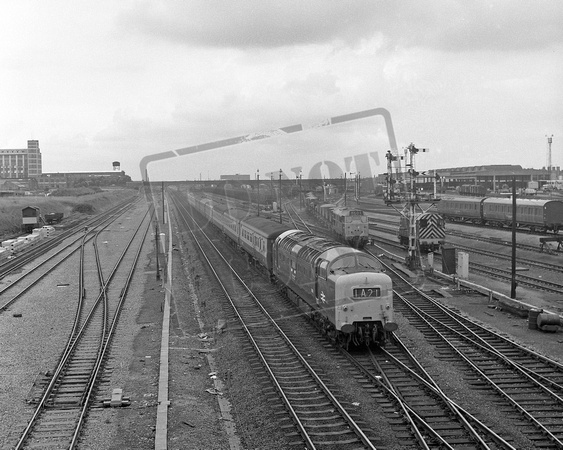 Peter Kerslake says "Planned delivery dates for the long awaited Deltics were not met, and 9001 seen her was, in fact, the first of her class to enter service, being outshopped in mid January of 1961 and working her first revenue earning duty at the end of the following month with the first of the class namely 9000 being delayed until March of that year.
Allocated from new to Edinburgh's Haymarket depot, and named "St. Paddy" in July 1961 she reached 100 m.p.h. whilst on a test run during her earlier trials notwithstanding that the twin Napier engines of the class were rated to a maximum speed of 90 m.p.h.
Reporting Number 1A21 indicates her train as being the 9:40 a.m. from The West Riding of Yorkshire to Kings Cross and with the yards of Peterborough's New England on the right she will now be heading through Peterborough North station bound for the Capital."
Powered by ZENFOLIO User Agreement
Cancel
Continue