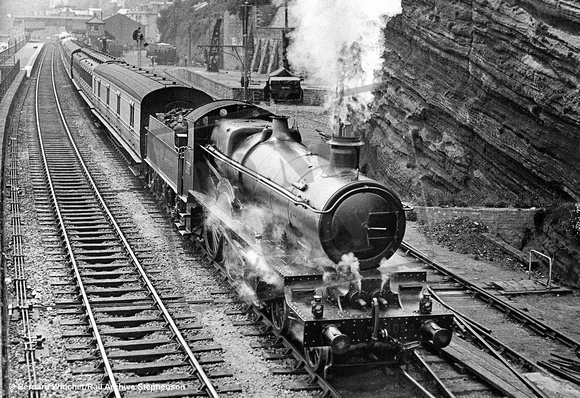 Peter Kerslake says "Photographed from "Coastguard Footbridge" at the east of Dawlish station seen in the background, 4054 "Princess Charlotte" lifts her heavy load eastwards and away towards the final stretch of the sea wall line, heading for Dawlish Warren, Exeter and beyond, the locomotive looking her best and coupled to a 3500 gallon tender, well stocked with coal .
The locomotive has doubtless worked up from Plymouth, having had a pilot over the South Devon banks to Newton Abbot where additional coaches from the Kingswear line have probably been added to the rear of the formation.
"Princess Charlotte" was one of the largest batch of "Stars" built at Swindon, with fifteen emerging from the Works during the Summer of 1914, all bearing "Princess" names.
Note the little wisps of escaping steam from both inside valve covers, quite a common sight in times past.
In their early years the majority of the "Stars"were allocated to Old Oak Common in the mid 1920's with a number also being on the books of Plymouth's Laira Depot and a few at Cardiff and Wolverhampton but by the year of this photograph they had become more widely dispersed and the number based at Cardiff in particular was increased.
4054 was withdrawn in February of 1952."