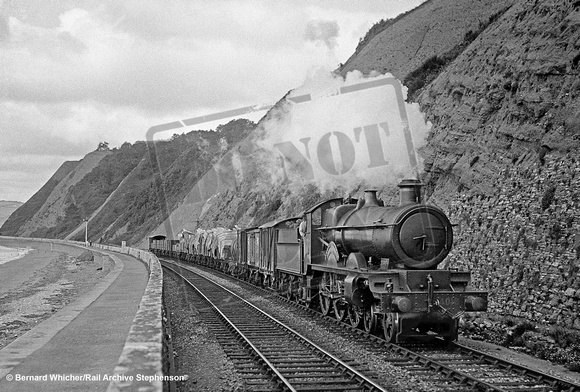 
Peter Kerslake adds "4012 was the second locomotive of the second batch of the class emerging from Swindon Works in 1908 and incorporating improved front bogies. During 1926, as new 'Castles' entered service there was a reorganisation of the duties worked by the Stars and the earlier allocation at Cardiff Canton was increased to permit more of the class to work the express passenger services between Cardiff and Paddington, replacing the 'Saints' which had been the earlier mainstay of these duties.
Later years saw the 'Stars' spread over a wider range of depots, ranging from Worcester, Bristol, Shrewsbury and Landore.
4012 remained in service until October 1949 and was not one of the class rebuilt as a 'Castle'.
There is clearly a substantial load of timber in a number of the wagons in this formation and I very strongly suggest that they have come from Teignmouth Docks, a few miles down the line as that establishment was, and still remains, an important entry port for large consignments of imported Baltic and Scandanavian wood."
Photo: Bernard Whicher/Rail Archive Stephenson
Bernard Whicher/Rail Archive Stephenson
Powered by ZENFOLIO User Agreement
Cancel
Continue