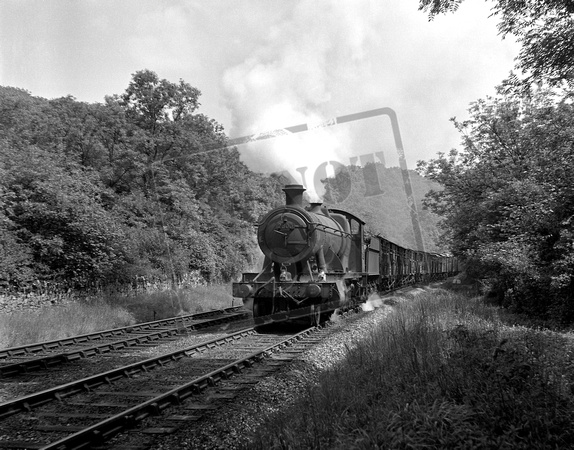 Class leader in it last full year of life, off Ebbw Junction and the neg packet just said with a Down goods.
Peter Kesrlake says "2800 was the first 2-8-0 wheeled heavy freight locomotive in Great Britain and was the first of a class totalling 168 which lasted in service right up to the end of Western Region steam operations in 1965.
Originally numbered 97 when built in June 1903, and renumbered 2800 in December 1912, it was one of Churchward's prototypes with a view to widespread use of the class on heavy coal traffic. It was followed by the production design two years later, those locomotives having a higher pitched boiler of 225lb. pressure and smaller 3000 gallon tenders than the 4000 version which 97 had emerged with from new. 2800 was the first to be condemned in 1958, a Newport Ebbw Vale engine in earlier years.
This view has the signs of being on Dainton bank, between Newton Abbot and Plymouth, but that's a shot in the dark, I'm afraid to say."
Powered by ZENFOLIO User Agreement
Cancel
Continue