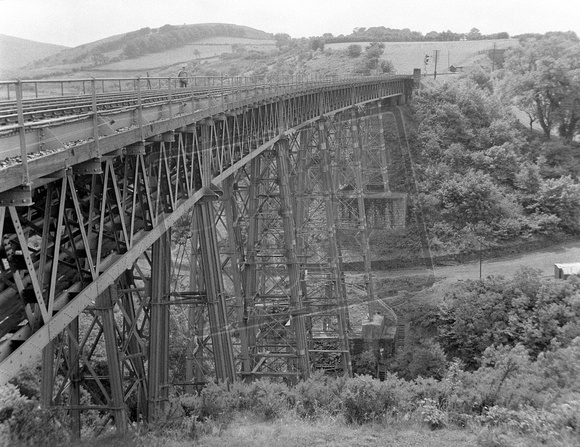 What an impressive looking structure here of the Meldon Viaduct , on the former Southern region line and just to the west of Okehampton station and running from Plymouth to Exeter , the " Withered Arm " as the line was known .
Although no longer a through route westwards to Plymouth the line from Exeter to Okehampton station and Meldon is still operational for the use of ballast trains from Meldon quarry , today still being the source of such ballast , in addition to Special enthusiasts' workings and Sunday passenger services during the Summer months

When originally bult in 1874 by the L.S.W.R. and their engineer W.R.Galbraith the viaduct over the West Okement River was a single track line some 120 feet above the valley below , the viaduct being widened in 1878 .
Widening to accomodate a second track was achieved by the construction of a second structure alongside the original , the newer section being utilised for the down line westwards , but later years and the run down of traffic on the line saw the viaduct reverting back to a single track again in 1965 .
Further loss of through traffic on the line in 1968 saw the viaduct used thereafter just as a headshunt for Meldon Quarry traffic and today the viaduct has no track but thankfully is preserved as a cycleway and footpath following a £650, 000 refurbishment
Powered by ZENFOLIO User Agreement
Cancel
Continue