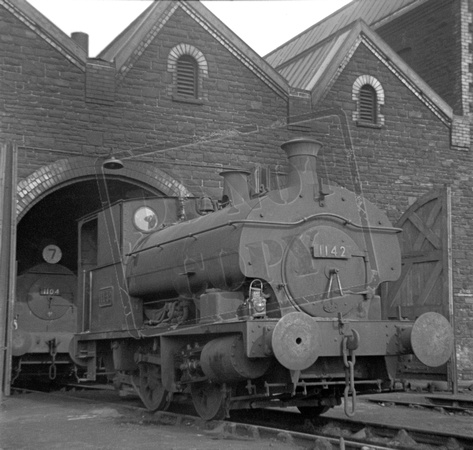 A fine study of 1142 here at Swansea's Danygraig Depot , its home shed , the locomotive dating back to 1911 , a Hudswell Clarke design for the Swansea Harbour Trust whilst 1104 is in the shed , a later 1926 design by Avonside Engine Company for the G.W.R. , both classes being used for dock shunting duties .
Situated to the east of Swansea the Depot had a substantial four track Running Shed and dated back to 1896 when the Rhonda Railway constructed it , together with a small Works and repair facility for both locomotives and freight wagons.
The Depot closed to steam in early 1960 and finally ended its service life four years afterwards although in the mid 1970s the C&W works in the old works depot overhauled a class 47 and further work was planned, but sadly the depot caught fire and was gutted one night.
© Rail-Online
Powered by ZENFOLIO User Agreement
Cancel
Continue