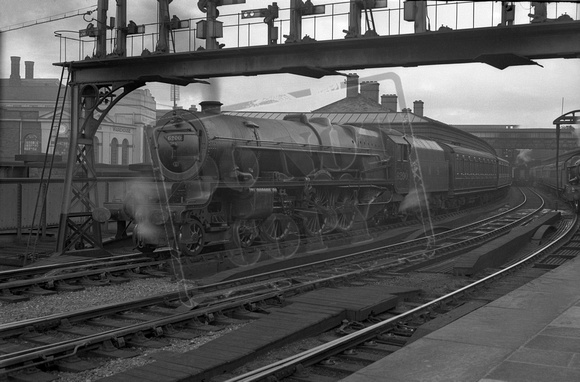 6200 The Princess Royal at Shrewsbury in late 1938. Changes since it was built in 1933 include a 10 ton curved sided tender fitted in November 1936, a domed combustion chamber boiler in June 1937 and its crosshead vacuum pump had been removed in June 1938. It had been allocated to Camden from new, moving to Edge Hill in April 1940.

Peter Kerslake adds "6200 is at the northern end of Shrewsbury station , with its distinctive water hose extending out over the platform line to allow engines on the adjacent through road to take water as well as those locomotives on the platform road, it remained in use right until the end of steam workings some thirty years later. The Great Western Castle just visible on the right will now be relieved by an LMS engine".
Powered by ZENFOLIO User Agreement
Cancel
Continue