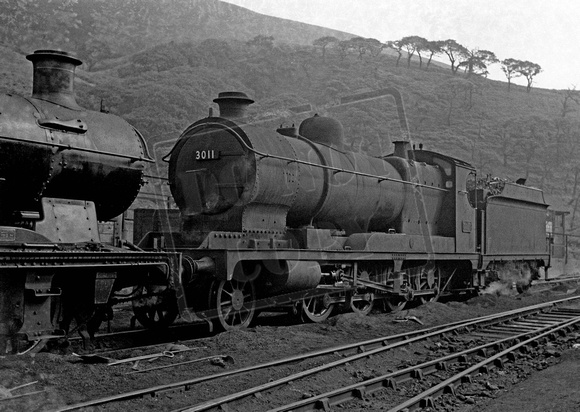 Peter Kerslake says "Coal expoer and later steel production and its transportation by rail from the Port Talbot area was such as to require the Port Talbot Railway to build a Motive Power Depot at Duffryn Junction in 1896, with its layout being extended by the Great Western Railway in 1931. This view shows "R.O.D." class 3011 amidst the rural and plesant surrounds to the east end of the shed yard although the western side overlooked the vast steel mills and everything associated with the steel industry.
3011 was destined to be the last of her class in service, surviving until late 1958 having earlier been returned to traffic following a period stored out of use at Carmarthen, the engine being one of twenty purchased by the Great Western in 1919 from the Railway Operating Department at the conclusion of the First War and thereby forming the initial series of the class.
A number of the class also saw service abroad in the Second War but those working within G.W.R. territory were not popular with their crews, regarded as being "rough, slow and uncared for".
By early 1956 twenty remained in service , concentrated mainly at Pontypool Road and Carmarthen ."
© Rail-Online
Powered by ZENFOLIO User Agreement
Cancel
Continue