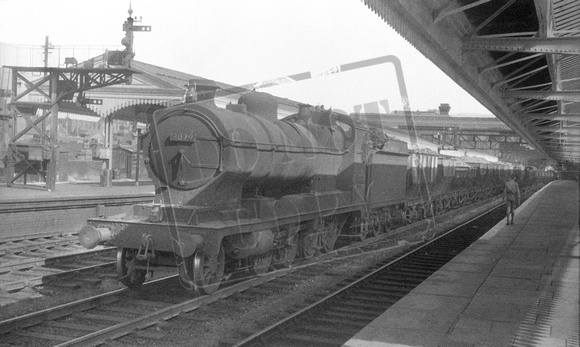 An ex R.O.D 2-8-0 No.3029 on a northbound iron ore train in 1955. The Great Western Railway purchased twenty of these engines, which were closely based on a design by J.G.Robinson for the Great Central Railway, from the War Department in 1919 and hired a further 84 between 1919 and 1922. It then purchased eighty of them from the Government in 1925, and in 1926/7 the best fifty were overhauled and renumbered, including No.3029; the others were scrapped by 1931. No.3029 which had been built by the North British Locomotive Company and was originally numbered No.3053 in 1925, was withdrawn from Oxley shed in May 1956.
Just a little to add to the most comprehensive and very interesting comment already posted , and 3029 had been a Worcester engine , being left as that shed's sole representative of the class when her three sister engines were transferred away from Worcester in February of 1953 .
3029 herself also left Worcester in the August of that same year , being reallocated to Wolverhampton's Oxley shed before being condemned in May of 1956 .
Twenty three of the class remained in service in late 1955 , their ranks being reduced to sixteen by mid 1956 with the last three ending their days from Carmarthen shed in October , 1958
© Rail-Online
Powered by ZENFOLIO User Agreement
Cancel
Continue