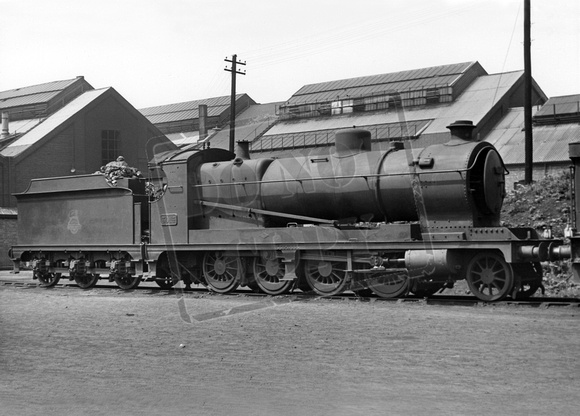 A nice portrayal of " ROD " number 3014 captured on film at her home shed of Bristol St. Philip's Marsh in June 1953 before a transfer in the August of the following year saw her at Carmarthen , from where she was finally condemned in October , 1955 .
This particular example of her class has an unusual design of boiler dome , much less rounded than her sister engines.

Not particularly liked by the Western footplatemen , and once described as " rough , slow and uncomfortable " , the Great Western Railways ' " ROD " class had been based upon the " O4" Great Central design by Robinson , with twenty of the class being purchased by Swindon in 1919 and immediately fitted with G.W.R. boilers and fittings , those locomotives being numbered from 3000 to 3019 .
The following years saw their numbers being substantially increased with no less than eighty four being hired by the Great Western Railway in that same year for just three years with yet another eighty being purchased in 1925 , numbered 3020 to 3099 but just thirty of that latter batch were overhauled by Swindon , the remaining fifty lasting in service just three years or so .
The last three of the class remaining in service were 3011 , 3015 and 3024 , all of which were taken from storage at Carmarthen in October of 1958 before being condemned.

Opened by the Great Western in 1910 , Bristol's St. Philip's Marsh Motive Power Depot had two Roundhouses and was the principal base for freight locomotives at Bristol with a large number of Pannier Tanks , " Halls " , " Granges "and a mix of freight classes on its books which were in June of 1954 joined by a number of Swindon built Stanier class " 8 F 's " , some of which had transferred from the Midland Region .
When the principal Bristol passenger locomotive Depot at Bath Road closed to steam in September of 1960 its remaining allocation was moved across to here at St. Philip's Marsh , but the subsequent closure of this Depot in June of 1964 resulted in all remaining Western region locomotives going to Barrow Road , joining the Midland Region locomotives there until the end of 1965 .
Powered by ZENFOLIO User Agreement
Cancel
Continue