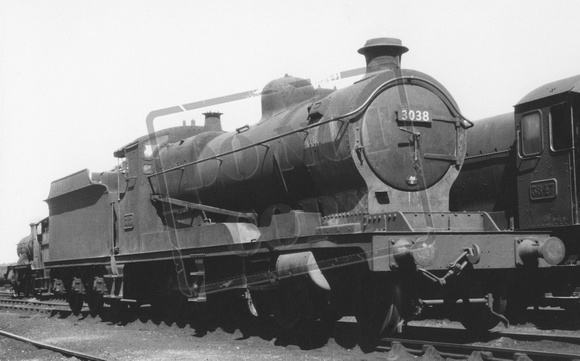 With 86G Pontypool Road shed code plate. This engine was still allocated to Pontypol Road in January of 1956 , the principal Motive Power Depot for the then remaining twenty members of the class , with a total of seven still on its books , although by October of 1958 the last three of the class were all condemned from Carmarthen Depot .
3038 had been one of the second batch of eighty of the class purchased by the G.W.R. in 1925 , the best thirty or so being overhauled and reboilered at Swindon Works soon after coming into service , whilst the fifty or so which were not so overhauled did not last more than about three years .
Not popular with footplate men over their years in service, the " ROD 's " were renowned for their rough riding characteristics , and were poor steamers particularly when compared with the Great Western's own design of 2-8-0 locomotives of the " 2800 " class .
© Rail-Online
Powered by ZENFOLIO User Agreement
Cancel
Continue