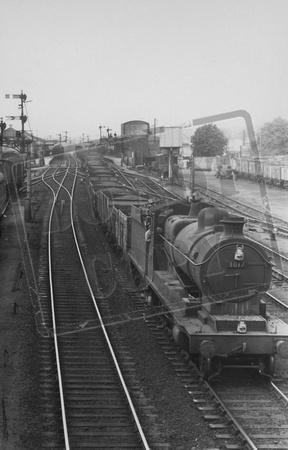 Heading south from Oxford.
Introduced on the former GWR in 1919 a number of the " ROD " class had the distinction of seeing service in both the First and Second wars with the Army Railway Operating Division , and although they were unpopular during their subsequent working lives with the Great Western , and later Western Region , footplate crews they survived until the last three were condemned from Carmarthen Depot in October of 1958 .
In the Spring of 1955 there were twenty four of the class still in service on the Western Region , with twenty still working in the following January , when five were allocated to Carmarthen , two to Tyseley ( including 3017 seen here ), four to Oxley , two being at Gloucester and no less than seven at Pontypool Road .
The early ' fifties had also seen examples of the class additionally being allocated to Worcester , Bristol St. Philip's Marsh , Stourbridge Junction , Banbury , Shrewsbury and Reading .
Tyseley's " ROD's " were frequently rostered on the iron ore freights from Banbury to the Midlands and South Wales whilst those at Pontypool Road often took the North to West route to such locations as Worcester and beyond , whilst it was not unknown for a Bristol one to work as far west as Plymouth !

A very recently discovered published copy of this very same photograph which was taken by R.H.G.Simpson tells me that it dates from the summer of 1952 with a class " H " mineral working passing through Oxford station , the locomotive bearing a Banbury shedplate from where it was allocated from April to October that same year , the engine being withdrawn in October of 1956 from Tyseley .
© Rail-Online
Powered by ZENFOLIO User Agreement
Cancel
Continue