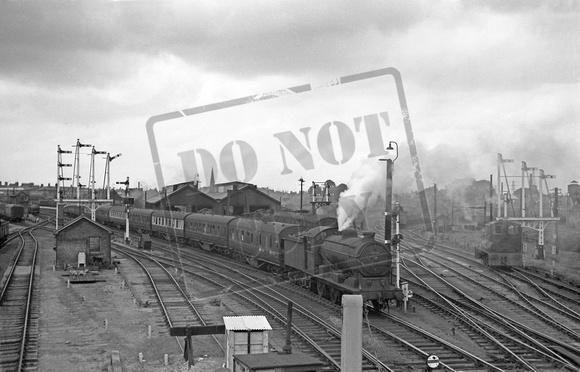 Note the early Drewry shunter. By the stock it is a Midlands train Possibly from Nottingham, Leicester or Derby.

Peter Kerslake adds "This fine view shows the extensive freight yards here at Kings Lynn, with the terminus passenger station just visible on the extreme left behind the signal box.
This working is departing from one of Kings Lynn's passenger terminus platforms, with the twin roofed Motive Power Depot clearly visible, this side of the Depot being known by enginemen as the "London End", from which locomotives would leave the Depot, the main shed area with its turntable and water tower are at the other end, hidden by the departing coaches.
The large gantry is for departing workings, with three single semaphores for Hunstanton, Dereham and the main line to Cambridge via Ely in addition to a three semaphore set on the left, whilst the facing signal to its right with its route indicator panel is the last one for footplatemen to watch out for as they run into the station on its left hand curve"
Powered by ZENFOLIO User Agreement
Cancel
Continue