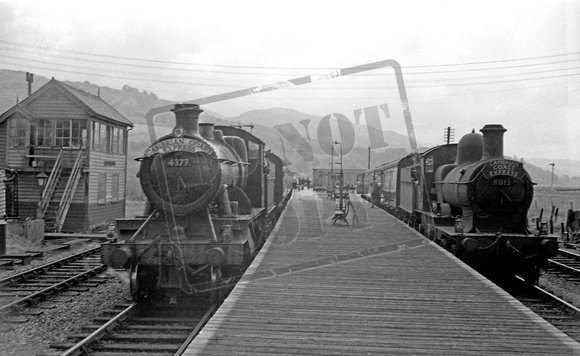 On the two Up CCE portions.

What a fine shot of both Paddington destined portions of the " Cambrian Coast Express side by side here at Dovey Junction , but a pity the weather isn't too good !
Our lucky cameraman has recorded 4377 on the left having arrived from Aberystwyth with its part of the working , whilst " Dukedog " 9013 has brought its portion down from Pwllheli via Barmouth .
The Pwllheli stock will now be drawn forward and added to the front of the Aberystwyth coaches by 9013 once 4377 has moved out of the way before 4377 will then be coupled up again now to the combined portion once the " Dukedog " has cleared its platform , and 4377 will then head off bound for Welshpool and Shrewsbury .
If the combined load is too heavy for 4377 I wonder whether they might Double Head as this was usually one of Aberystwyth's more powerful " Manors " which were rostered to this duty through to Shrewsbury ?
Note the " Old Style " headboard on 9013 and its later style on 4377 .
9013 remained in service until the late ' fifties , outliving a number of its sisters and being a late withdrawal .
© Rail-Online
Powered by ZENFOLIO User Agreement
Cancel
Continue