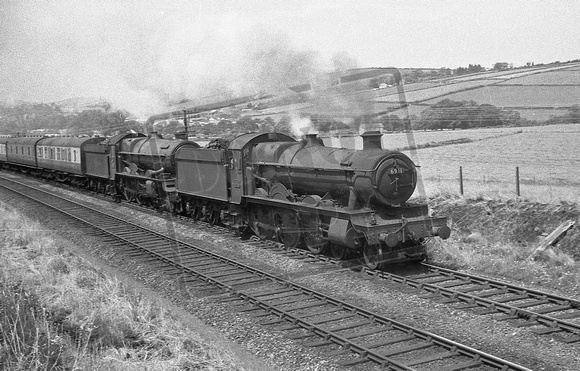 Peter Kerslake recalls "Saint Blazey's 6911 , " Holker Hall " is pilot to Old Oak's 6000 , " King George V " in my image from about halfway on the ascent of Hemerdon bank with a Paddington bound express , date not recorded.
Neither engine appears to be working very hard , which is unusual for this location and its 1 in 42 grade and it may be that it's a warm day.
6911 will assist to Newton Abbot only over the South Devon banks.
6000 had been a rare visitor to the far West up to April , 1954 as , being allocated to Bristol Bath Road shed it had worked to and from Shrewsbury on "West to North " expresses via the Severn Tunnel but following a spell in Swindon Works from March of that year it was reallocated to Old Oak Common , and as a result, and in common with that shed's other " King " class engines it fortunately became a regular visitor to us enthusiasts down in Plymouth."
© Rail-Online
Powered by ZENFOLIO User Agreement
Cancel
Continue