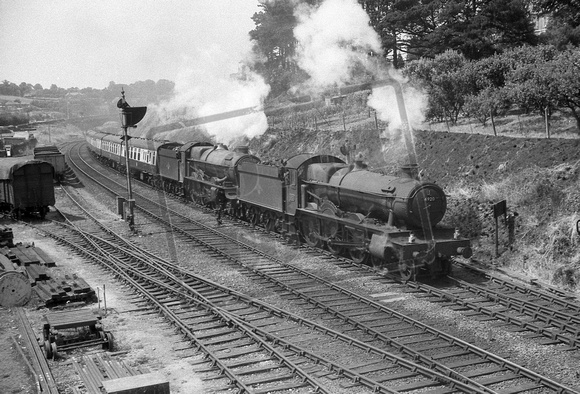 It was not often that the Paddington bound " Cornish Riviera" would have been brought to a stand by adverse signals, particularly here at the very foot of the 1 in 42 ascent of Hemerdon bank, but it's happened here ! Piloted by 4920, " Dumbleton Hall " an unidentified " King " has been brought to a stand at the approach to Plympton station by the signal which has now "cleared " but there's a now a long slog up the bank which lies immediately ahead.
Something must have been in trouble ahead of the "Riviera" , possibly a freight on the climb to Hemerdon summit. 4920 is happily still with us having been preserved following its portrayal in a fine painting by railway artist Don Breckon and is presently (2014) at Buckfastleigh on the South Devon Railway
© Rail-Online
Powered by ZENFOLIO User Agreement
Cancel
Continue