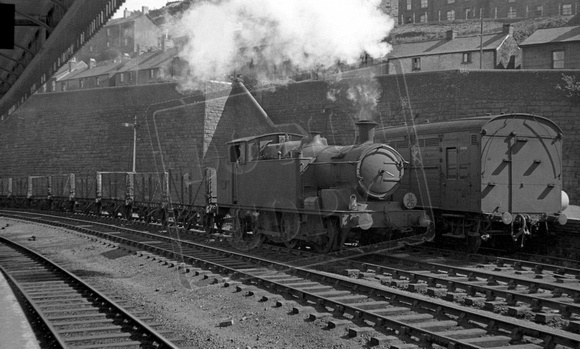 Ex-Rhymney Railway 'A' class 0-6-2T No. 58 (built 5/11) was shedded at Barry, so may have brought its train from there and is destined for one of the numerous Collieries up the five Valleys fed through Pontypridd. 'B26' displayed on the engine signifies a working from Barry.
On empties passing Pontypridd Station returning to the mines. Viewed southward from the Down island platform, towards Cardiff (by the former Taff Vale Railway), Newport via Caerphilly and Machen (by the former Alexandra (Newport & South Wales) Docks & Railway), also Barry via Creigiau (by the former Barry Railway).
Powered by ZENFOLIO User Agreement
Cancel
Continue