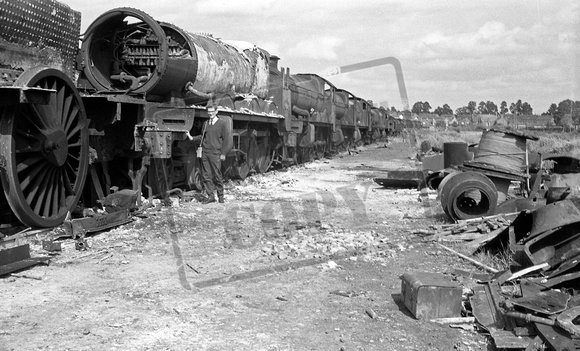 Peter Kerslake says "I look a bit younger here, but it was fifty years ago so I suppose that's understandable!
My third and final visit to Coopers Metals at Sharpness, on the Gloucestershire bank of the Severn, and poor old 5040 "Stokesay Castle" , one of Old Oak Common's finest in days past, is now being dealt with, but 5050 , "Earl of St. Germans", on the extreme left, is cut in half, and in an awful state.
This is the bottom end of Coopers' line, and I think that they took more engines from Swindon than they were able to deal with, with the result that a number seen in the distance in this view, including 7037, " Swindon " together with 7009 " Athelney Castle " and 7015 " Carn Brea Castle " were subsequently "sold on" to Cashmores at Newport and were not , in fact , in the end disposed of here at Sharpness"
Powered by ZENFOLIO User Agreement
Cancel
Continue