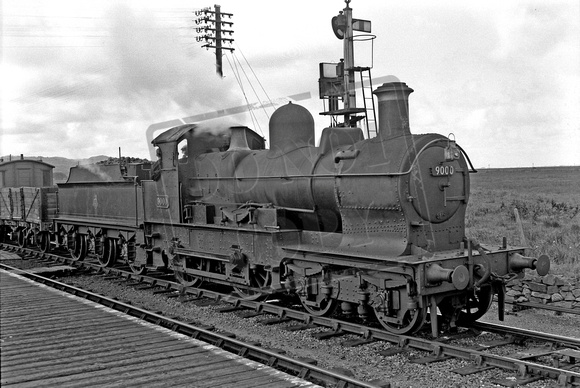 The solitary wagon is a LNER standard 13 tonner with a broken back, so common with early LNER built vehicles. The loco is standing on the loop opposite the coast line platform, facing towards Machynlleth. Thanks to Nigel Wassell for helping with this.
Peter Kerslake says "Although it was during 1929 that the GWR married the frames of condemned Duke class 3265 Tre Pol and Pen with the boiler and cab fittings from Bulldog 3365 it was not until 1936 that further members of what became the Earl class were built.
9000 has a later boiler than its original, with separate water top feed squared sandboxes ahead of the cab. It was constructed in 1936 using the frames from withdrawn Bulldog 3422 Aberystwyth with the boiler, cab and fittings from similarly condemned Duke 3288 Mendip. 9000 originally had the name Earl of Mount Edgcumbe from new until July 1937 when all the Earl names borne by the class were transferred to the new Castles then emerging from Swindon."
Powered by ZENFOLIO User Agreement
Cancel
Continue