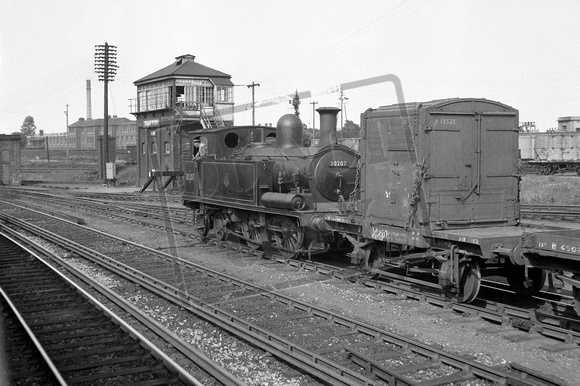 Early 'Container Freight' -it's a 10 foot A type, note the chains and securing shackles. No 'Twist-Locks' in those days or huge Container Freight Yards!
Mike King comments
O2 0-4-4T 30207 shunts container wagons near Fratton East signal box in June 1955. At this time it was Fratton's sole representative of the class and was often used on the Dockyard shunt, which left the up line from Portsmouth Harbour just to the west of the high-level platforms at Portsmouth and Southsea station, via a trailing connection. The shunt involved travelling through the high-level station on the down line, crossing over to the up line and then reversing into the dockyard. The return trip was much simpler and just involved running through the up platform. In those days the Dockyard had a very extensive internal railway system, with many of their own wagons. Today, just four of them remain preserved within the public area of the docks. 30207 is pull-push fitted - not that this would be needed for any of its Fratton duties and the large Westinghouse air reservoir is prominent on the footplate. It received these fittings in late 1932, but the loco ran in service from December 1891 until June 1957. The container wagon is of GWR origin, while the A class container is of LNER design. Fratton East box dates from June 1885; a type 3 LSWR box, it held a 38-lever frame. This was later increased to 47-levers and the box was lengthened at the far end. It was especially tall to afford the signalman a good view of all shunting moves, much of the track layout being on a curve. The box closed along with Fratton West and all surrounding mechanical boxes on 7th April 1968, when the new Portsmouth panel box took over the area.
Powered by ZENFOLIO User Agreement
Cancel
Continue