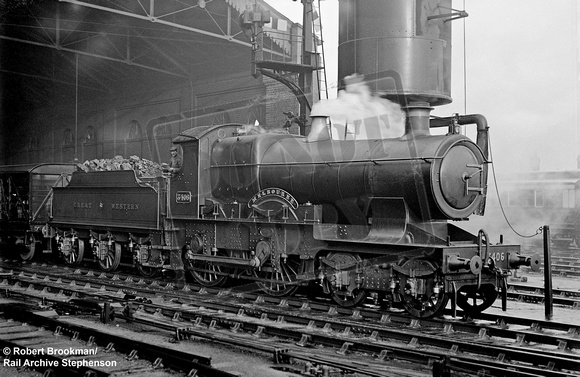 GWR City class 4-4-0 No 3406 Melbourne at Wolverhampton in c1908.
Peter Kerslake says "Robert Brookman has ventured away from his usual London area and has recorded 'City' class 3406 Melbourne at the southern end of Wolverhampton station on a local stopping service It was originally built as a member of the 'Atbara' class in late 1901, and was rebuilt as a 'City' in 1908.
Allocated to Wolverhampton from early 1908, Melbourne was in later years transferred to Chester, remaining in service until mid-1929.
The distinctive looking leading van is for milk traffic in the days when it was conveyed by rail in churns to London, with the empty churns transported back to the rural stations adjacent to the local creameries and milk processing centres ready for the next day's load."
Photo: Robert Brookma/Rail Archive Stephenson
Robert Brookma/Rail Archive Stephenson
Powered by ZENFOLIO User Agreement
Cancel
Continue