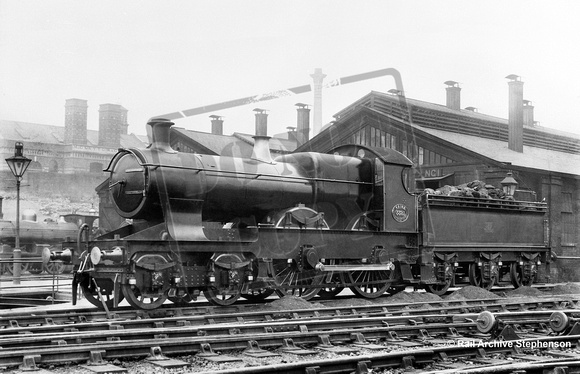 GWR Atbara class 4-4-0 No 3381 Maine in original condition at Westbourne Park shed.
Peter Kerslake says "The first of the "Atbara" class which emerged from Swindon Works in April 1900 was 3373, initially named "Atbara" which later became "Maine" in October 1900 when it headed a "City Volunteers' Special" working, and then being named "Royal Sovereign" in February of 1901 when it had the honour of hauling Queen Victoria's funeral train, the Great Western being quite adept at changing names as and when circumstances required which must have been confusing for the enthusiasts of that period.
The combined oval number and "Maine" nameplates are on the correct engine in this view, namely 3381 which later became 4128, this engine having been built in May 1900 and lasting in service until being condemned from Swindon in July 1927, with just the first twenty three of the class having this form of combined oval plates.
The last of the class in service was 3412, later numbered 4148, "Singapore" which was withdrawn from Severn Tunnel Junction depot in May 1931."
Photo: Rail Archive Stephenson
Rail Archive Stephenson
Powered by ZENFOLIO User Agreement
Cancel
Continue