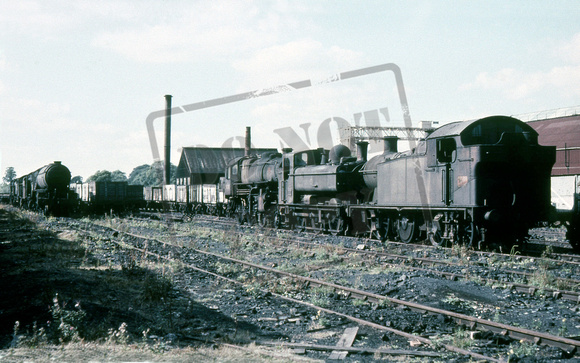 The pannier still has its cabside number plate, note the LNER V2 still there.

Peter Kerslake says "An interesting view from Swindon Works "Dump" in September 1964 with a "V2" from the North Eastern Rergion waiting is fate under the cutters' torches together with a couple of W.R. tanks and a L.M.R."Mogul".
I visited here just two weeks later and recorded the two lines on the right both full of V2s, eight on the nearest line with more behind, all from the same region, all awaiting disposal and all minus their tenders.
Swindon had more resources available for disposing of condemned locomotives than did other Regions' Works but the story is that Swindon also wanted the six wheel V2 tenders for conversion to snow ploughs, the previous winter having seen heavy snow in the Westcountry, but the North Eastern insisted that Swindon would also have to take the engines as well!"
Powered by ZENFOLIO User Agreement
Cancel
Continue