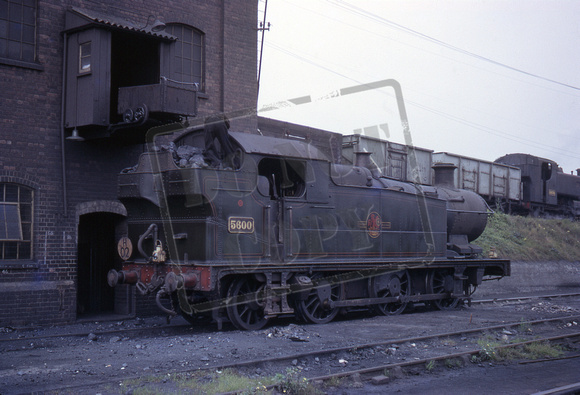 Peter Kerslake says " A very special "Taffy Tank" in lined out green livery and the pioneer of what was to eventually be a class of two hundred with 5600 recorded in 1962 at Radyr M.P.D., some four miles or so north of Cardiff on the line to Aberdare and beyond.
Radyr depot had begun life in September of 1931, being upgraded from its former sub shed status to Cardiff Cathays to the main shed and becoming 88A in early 1958, the establishment remaining an active depot until closure in July of 1965 and having had more than fifty tank engines on its books in its heyday.
5600 had been the forerunner of the first batch of one hundred of her class emerging from Swindon in 1924, with a second batch of again one hundred joining them in 1927, the last fifty of that second series being constructed by Armstrong Whitworths of Scotswood on Tyne.
This view shows the sliding shutter to the cabside, a later modification made necessary for the protection of the footplate men especially when the class were working bunker first during the Welsh winter weather together with the recessed bunker necssary to hold the lamp during such bunker first workings."
© Rail-Online
Powered by ZENFOLIO User Agreement
Cancel
Continue