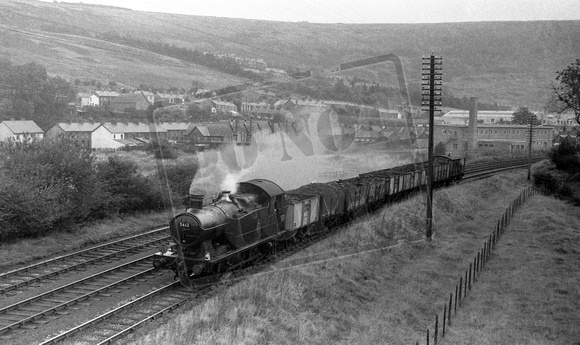 Coal traffic has dropped to just 8 wagons and it looks like pretty dreadful stuff!

A fine shot of Treherbert's nicely turned out " Taffy Tank " 5613 as she heads a typical but short rake of loaded Welsh coal here at Llwynypia on the line betwen Treherbert and Pontypridd with a typical Welsh Valley background of massive hills and rows of modest little cottages .
Many of the Welsh Railways tank locomotives acquired by the Great Western Railway upon the grouping in 1923 were soon found to be past overhaul at Swindon and it fell to Mr . Collett to urgently come up with a design which would be capable of working the Welsh valley passenger and freight services and the " 5600 " class was his answer.
A total of 200 were to follow , the first 100 entering service in 1924 , numbered 5600 to 5699 ,with the second batch of 100 , numbered 6600 to 6699 following three years later.
All were Swindon built save and except 6650 to 6699 which came from Armstrong Whitworth of Scotswood on Tyne
No less than 87 of the first batch were still allocated to Depots within South Wales as late as 1956 , the remaining 13 being at Stourbridge , with three , Didcot with four and the remaining six being found at Shrewsbury , Bristol , Chester , Oxley and Westbury.
A very elderly 5605 was the last survivor of the class , being condemned as late as 1966 ,so she must have been a good one !
Powered by ZENFOLIO User Agreement
Cancel
Continue