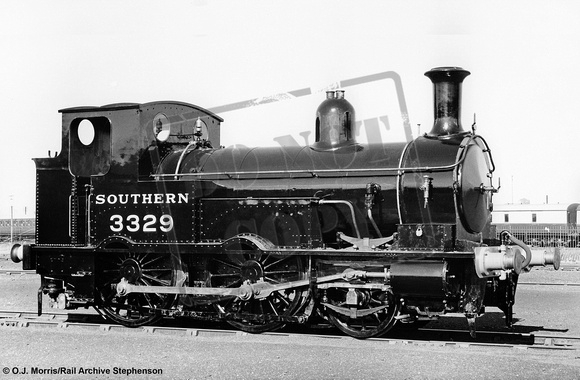 Peter Kerslake says "This must surely be a very rare image of Beattie Well Tank 3329 in new colours as I very much doubt that many other such records exist.
A superb photograph, with 3329 being one of just three of its class to have survived in company with classmate engines 3298 and 3314 following many years working the London and South Western Railway suburban lines from the Capital after their introduction to those services in 1870.
In the late 1890's the three survivors were despatched westwards to Wadebridge in North Cornwall for use on the Wenford Bridge china clay freights and this one became 30586 with 3298 renumbered 30587 and 3314 becoming 30585.
The trio served in Cornwall for sixty years with one usually being in daily use on the china clay workings, one engaged on station pilot duties at Wadebridge, and one held in reserve until their working days ended in September of 1962 with sadly 30586 being cut up but happily both 30585 and 30587 have been preserved."