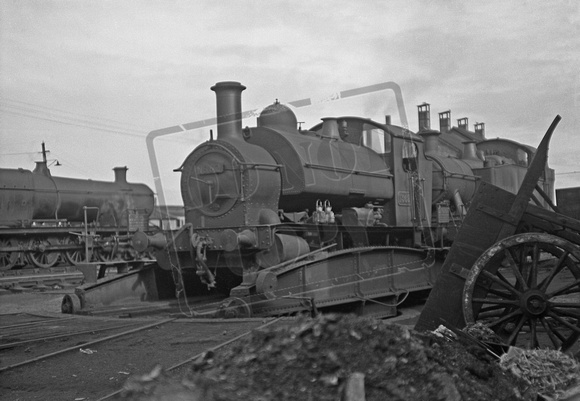 Amid the usual chaos of a locomotive depot in the days of steam little saddle tank 1362 shares Newton Abbot Depot's turntable with a " 4500 " class tank engine , both looking work weary in this view from 1952 .
Whilst three of the five of this class were to be found working in Millbay Docks at Plymouth from their home depot at Laira , 1362 seen here was allocated to Newton Abbot until a move to Taunton in 1956 or thereabouts , from where she worked at Dunball Wharf at Bridgewater docks .
1365 was to be found allocated to Swindon Depot , spending her time in and around the Works .
The sole survivor of the class of five was 1363 which ecaped a last journey from her home at Plymouth's Laira Depot to Swindon for cutting up there because during a tow from the Roundhouse at Laira her front drawbar fractured and she was hastily shunted back into the deep , dark depths of the Roundhouse , remaining there alone and forgotten until salvation in the form of a member of the Great Western Society purchased her for preservation !
© Rail-Online
Powered by ZENFOLIO User Agreement
Cancel
Continue