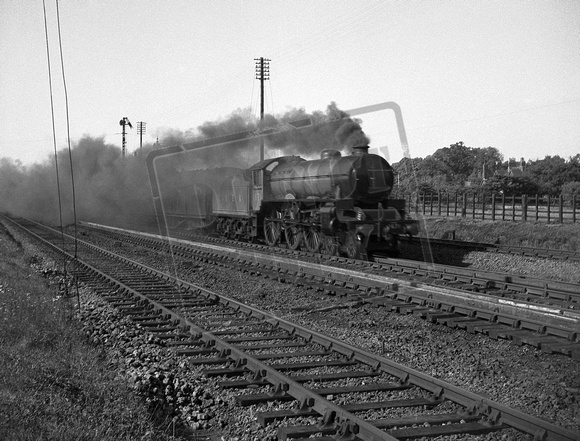 If the fireman fired like this all day it would be his last trip on 'Royal Sovereign'!

Peter Kerslake says "It's not fair to blame the poor unfortunate fireman as he may have been landed with a tender of poor quality coal or has been given the B2 when it was not at it best, but whatever the cause they are certainly puttting down an impressive smokescreen which would have delighted any railway cameraman.
"Royal Sovereign" was invariably maintained and turned out well, the engine being Stratford's favourite for working Royal Trains from Liverpool Street when members of the Royal Family were travelling to Sandringham.
After rebuilding with two cylinders in 1945 and thereby constituting theB2 class of ten locomotives "Royal Sovereign"was selected for evaluation test runs. firstly in 1945 and then again in 1947 running against two original B17. It remained in service until September 1958."
Powered by ZENFOLIO User Agreement
Cancel
Continue