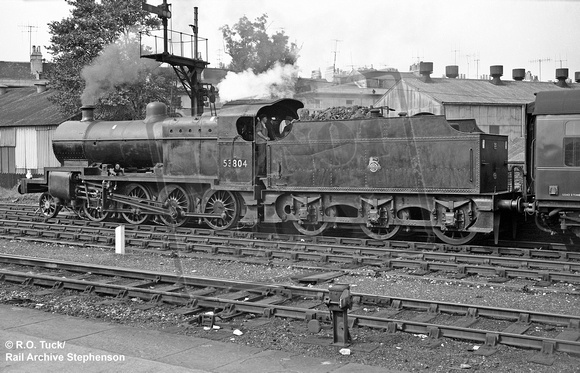 Peter Kerslake says "A splendid portrait of Fowler "7F" 53804 at Bath Green Park, looking her best and well turned out for duty on a Special working on the 11th September, 1960 , this fine view showing to advantage the powerful lines of the class which were mainstay of both passenger and freight workings virtually every day on the Somerset and Dorset from 1914 until 1964.
Purpose built by the Midland Railway for the Somerset and Dorset, the initial six came from Derby in 1914 with five more built by Robert Stephensons in 1925, the later examples having larger boilers, with the class being equally at home and capable of working heavily loaded passenger rosters over the Mendip hills as well as substantial rakes of both mineral and coal traffic, the latter being a main source of freight workings with coal from the Somerset Collieries generating substantial amounts of freight workings on the line.
53800 was the first casualty in 1959 whilst 53809 remained in service until 1964, with 53808 and 53809 thankfully being preserved following withdrawal."