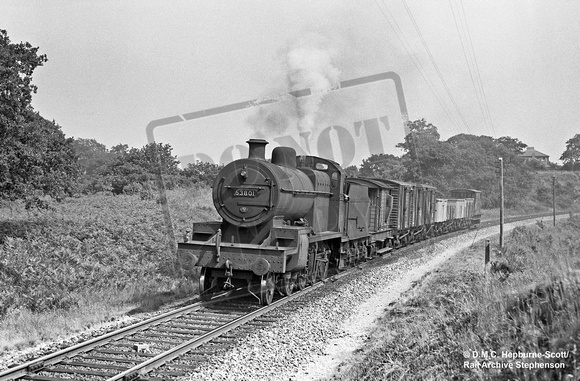 Peter Kerslake says "A lightweight freight for Fowler "7F" 53801, the second of her class and one of the initial six built at Derby in 1914 and designed specifically for use on the Somerset and Dorset by Sir Henry Fowler, with a further five coming from Robert Stephensons in 1925.
Corfe Mullen was at the extreme southern end of the Somerset and Dorset line with the stretch of single track seen in this view extending down to Broadstone, the line thereafter continuing southwards from Broadstone and reverting to double track down through Poole and to Bournemouth West over Southern Region tracks.
So familiar on Somerset and Dorset services throughout their lives the "7F's" were the mainstay of both heavy passenger and freight workings until the last survivor 53807 was condemned in September of 1964, the first to go having been 53800 five years earlier."