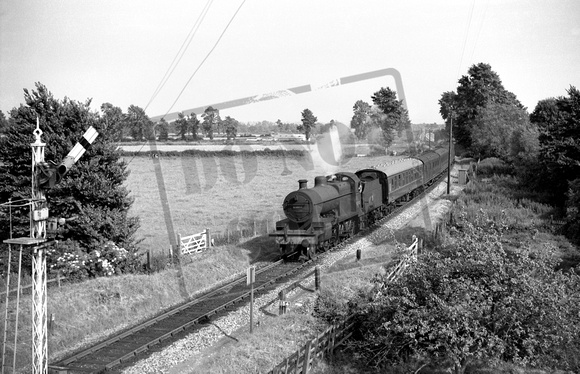 A splendid shot of 53803 heading up from Blandford and the South Coast on the single line section of the Somerset and Dorset and approaching Templecombe lower platform on a Bath bound working .
Templecombe , some 37 miles from Bath , was a busy interchange point , with the Somerset and Dorset line meeting the Southern Region main line from Waterloo down to Exeter , and the lower level S. & D. station was below the higher Southern main line , with this working seen here approaching that lower platform , the Southern Region's platforms being out of shot on the far right in this view and complicated stock and engine movements were very much the norm here at Templcombe , especially on Summer Saturdays with a number of Somerset and Dorset line workings having to reverse into the Southern's upper platfoms .
53803 was one of the initial six of her class built at Derby in 1914 , intended by Mr . Fowler to work the heavy coal traffic on the Somerset and Dorset , and was followed by a further six built in 1925, the later versions having larger boilers than their earlier sisters.
The first withdrawal was 53800 in 1959 , with 53807 being the last in srvvice until withdrawal in 1964 , and happily both 53808 and 53809 have survived into preservation .
Powered by ZENFOLIO User Agreement
Cancel
Continue