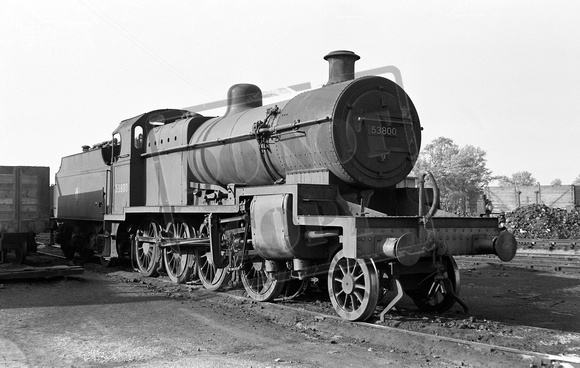 Peter Kerslake says "The first of her class of eleven, 53800 had emerged from the Midland Railway's Derby Works in 1914, designed specifically for operations on the Somerset and Dorset line by that Company which was at that time responsible for the provision of the line's Motive Power.
Whilst the initial six came from Derby the following five were built by Robert Stephensons and had larger boilers than those from Derby.
During fifty years of service the eleven were the primary source of motive power on the S. & D., equally at home on both passenger and freight duties, but as the years passed there became a frequent need for them to be double headed on the heavy additional passenger workings that ran on the line throughout the busy Summer Timetabled workings during the line's glory years until 1962.
A classic "Maid of all work", therefore, 53800 became the first to be withdrawn in 1959 but her sisters soldiered on into the 1960's with 53807 being the last to survive until September of 1964."
© Rail-Online
Powered by ZENFOLIO User Agreement
Cancel
Continue