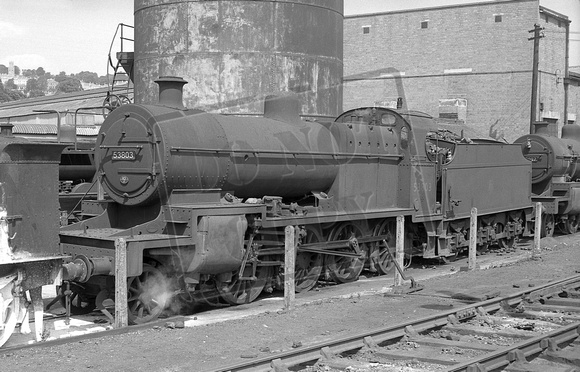 Any enthusiast visiting Bath Green Park Motive Power Depot in its heyday would be certain to record at least one of their Fowler Class " 7 F ' s " on shed , and here we have two with 53803 and 53807 in company in July of 1961 .
Bath Depot , the principal shed on the Somerset and Dorset , was home to the class of eleven , the locomotives working over the whole of the Somerset and Dorset system , from the south coast to Avonmouth .
Whilst designed and intended primarily for freight duties they were additionally regularly rostered on local passenger duties , and were pressed ito service during the busy Summer months in assisting with the long distance passenger services , invariably on a " Double Headed " basis .
Two have happily survived into preservation , namely 53808 and 53809
© Rail-Online
Powered by ZENFOLIO User Agreement
Cancel
Continue