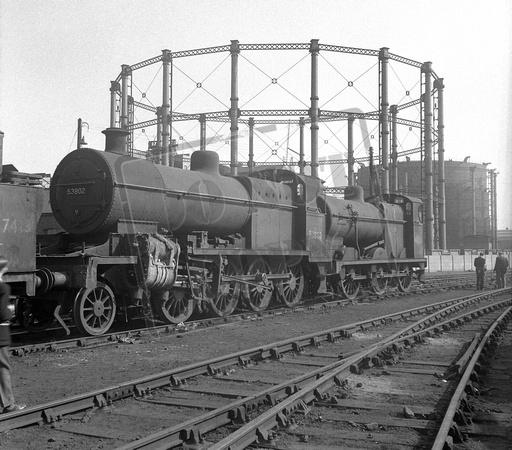 With minor front end damage, it was soon back in service and lasted to 1964.

Bath Green Park allocated 53802 is here for repairs as there seems to be some damage to her front footplating above the buffer beam, the cylinder casing has certainly been removed.

This can, we think, be dated to August 1959. It is listed in a 'Steam Archives Services' list of engines on Bath Green Park on Sunday 16th August 1959 as 'waiting for damage repair' (73116 is also listed as needing damage repair so maybe they had a minor scrape). It did not, however, last until 1964 but was withdrawn early in March 1960 (we have seen 5th and 8th quoted as withdrawal dates). The 'Railway Observer' reports it as being in Derby Works yard on 13th April 1960 and being towed to Doncaster Works for cutting on 21st April. None of the first series 7Fs lasted in traffic beyond 1961 although the last two (53803 towing 53804) did not leave Bath until 1st Feb 1962. It was 2nd series 7Fs that went through to 1964.
Sister engine 53800, the first of the class, was also the first to be condemned in 1959
© Rail-Online
Powered by ZENFOLIO User Agreement
Cancel
Continue