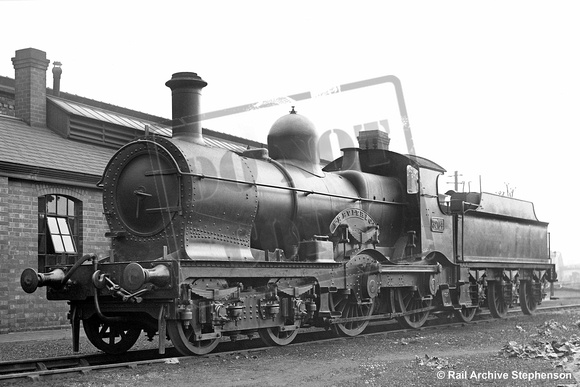 GWR Duke class 4-4-0 No 3264 Trevithick at an unknown location. Dukes did not start getting topfeed until 1913 and the cab portholes have been plated over or a new cab front provided so this is late '20 s or 1930s.
Peter Kerslake sdays "The "Dukes" emerged from Swindon from 1895 with forty entering service by 1897 before they were followed by the first of the "Bulldogs" in 1898 with twenty "Dukes" being rebuilt as "Bulldogs" between 1902 and 1909.
When first in service the "Dukes" reigned supreme in the West Country, being capable of tackling the banks between Newton Abbot and Plymouth, a task which the "Achlles" single wheelers were unable to master.
Replaced by the "Bulldogs" in their later years the "Dukes" still saw service in Devon and Cornwall but a number were transferred away for use on secondary passenger services in the Paddington, Wolverhampton and Bristol Divisions with a number also going to Wales for use on the Cambrian network."
Photo: Rail Archive Stephenson
Rail Archive Stephenson
Powered by ZENFOLIO User Agreement
Cancel
Continue