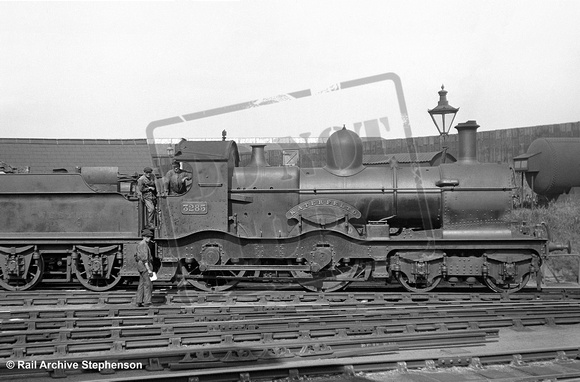 I think this is Wolverhampton Low Level station, the embankment and the fence fit later views, see pannier 9776 in 1965.

Peter Kerslake says "If this is Wolverhampton then it's probably a late view of "Duke" 3285 Katerfelto" as in their heyday the "Dukes" were to be found mainly down in the Newton Abbot and Plymouth parts of the Great Western network working as far down as Penzance and well able to tackle the South Devon banks at Dainton, Rattery and Hemerdon when rostered to express passenger duties.
In their later years, however, the "Dukes" were displaced to Old Oak, Wolverhampton and Bristol, giving way to the "Bulldogs" on Westcountry services, so this view may, therefore, be from about 1920 or so."