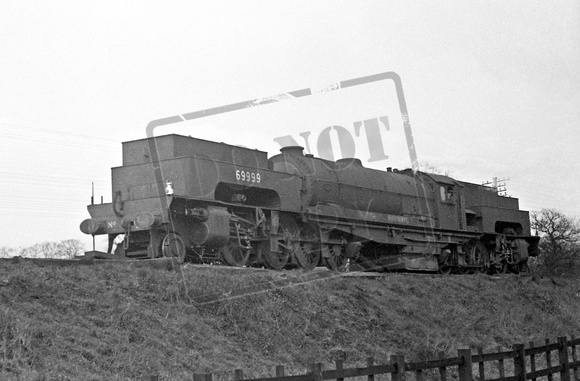 Peter Kerslake adds "A very rare shot indeed of the ex. LNER Beyer Garratt , made redundant from its Worsborough home in 1949 on the Lickey ,
This massive engine's initial time at Bromsgrove was short lived , however , and it was known amongst the footplate crews for its insatiable appetite for coal , and even after subsequent conversion to oil burning it was not a popular engine , and it fell to the Standard 9F' s to provide replacements for " Big Bertha "when she was withdrawn in 1956.

More recent research tells me that 69999 had been made redundant from its banking duties on the Worsborough incline between Wath and the Woodhead Tunnel on the cross Pennine Sheffield to Manchester line in 1949 upon electrification of that line .
The massive and extrememly powerful locomotive was accordingly despatched in March of 1950 to Bromsgrove in order to perform similar banking duties assisting northbound workings on the renowned Lickey incline from Bromsgrove up to Blackwell at the summit , but initially lasted there only until November of that same year .
A ferocious appetite for coal was its downfall , and footplate crews found " buffering up " to its train's rearmost coach or wagon at the foot of the Lickey a formidable and difficult task with so much locomotive ahead of the cab , with reports that it was easier to use 69999 banking in reverse than running forward .
Following conversion to an oil burner , 69999 was returned to Bromsgrove again in 1955 but I do not think she lasted there for very long before withdrawal.
Powered by ZENFOLIO User Agreement
Cancel
Continue