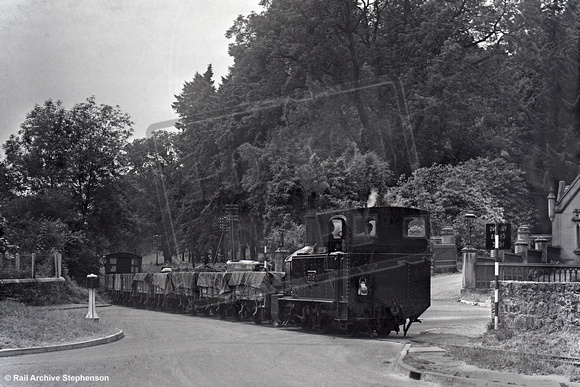 WLLR 0-6-0T No.823 Countess holds up the traffic as it crosses the Brook Street/Raven Street Junction with a train of nine open wagons from Llanfair in 1949. There was originally a halt at Raven Square on the town side of this intersection and today’s preserved railway terminates there. The new station was opened in 1981 and several years later the railway purchased and re-erected the station building from Eardisley on the former Hereford, Hay & Brecon line.

At the end of the Second World War both engines were in very poor condition with badly corroded fireboxes and worn tyres and in December 1946 No. 823 was deemed unfit for service. It was sent to Swindon for a complete overhaul including a new firebox and over a year later, in February 1948, it returned with its wartime unlined black livery replaced by unlined green. While Countess was away, No. 822 The Earl failed completely and had emergency repairs which enabled it to carry on the service within two weeks and once No. 823 was back it also went to Swindon for a major overhaul.

The lodge on the extreme right was the gate lodge for the early 19th Century Llanerchydol Hall and is now in use as holiday accommodation trading as Llanerchydol Lodge. It was given Grade II Listed status in 1981 ‘for its historical and architectural connection with Llanerchydol Hall, and as an example of a Picturesque Gothic lodge’; the Hall itself was listed in 1950.